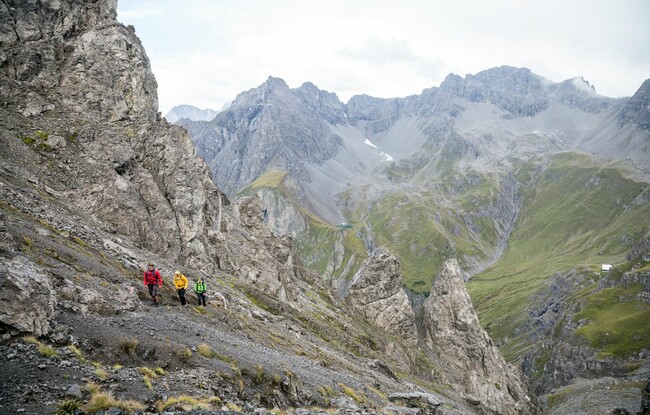 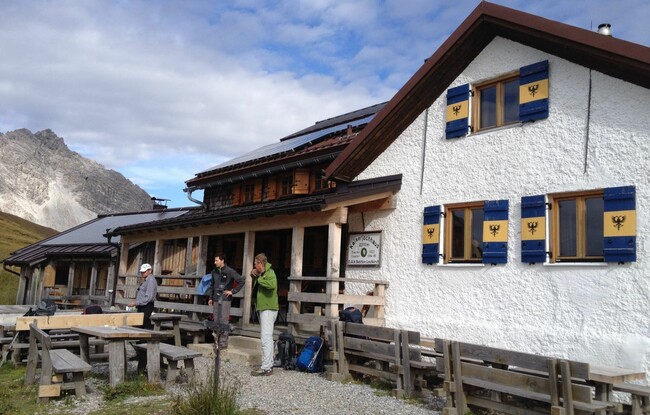 ​trail description: Start off at Ansbacher Hut and gently ascend on a well-defined singletrack trail up to Flarschjoch Saddle. Just below the saddle, you have the option of branching off to Memminger Hut; the Eagle Walk gently descends across scree slopes and meadows from Flarschjoch Saddle, heading towards Knappenböden. There, the trail levels off and continues ahead across scree slopes to Alperschonjoch Saddle, which has a little cross at its top. Beyond the saddle, the trail slightly descends before resuming its climb in switchbacks; eventually the trail winds down to Vordersee Lake. This section skirting the southern side of spectacularly rugged Vorderseespitze Spire is called Haas-Weg Trail. Haas-Weg Trail mostly crosses meadows as well as exposed and steep rock flanks and cornices; many sections are assisted by a fixed anchoring system of cables. From Vordersee Lake, the trail begins a gradual climb and heads towards Hinterseejoch Saddle. As you approach the saddle, the ascent steepens, with the trail following an earthy footpath that zigzags up to the dip. Beyond Hinterseejoch Saddle, the trail heads gradually downhill in switchbacks. Some distance ahead, the trail traverses scree slopes westward, slightly descending, before resuming its climb below Kridlonscharte Notch for a short distance. Here, the soil can be earthy and slippery in wet conditions. Eventually, climb up to Kridlonscharte Notch, with the trail following a rocky footpath through exposed and rugged terrain and across a chimney where fixed cables are mounted. On the other side of the notch, the trail descends on a winding footpath through mountain meadows, passing by a rock ledge. Soon, the trail heads westward and traverses the slopes leading to Kaiserjochhaus Lodge. In this section, the scant trail is exposed to steep drop-offs in rugged terrain with many ups and downs; many sections are assisted by a fixed anchoring system of cables. Eventually, continue ahead through meadows to reach the destination end of this walk, inviting Kaiserjochhaus Lodge at an elevation of 2,310 metres.