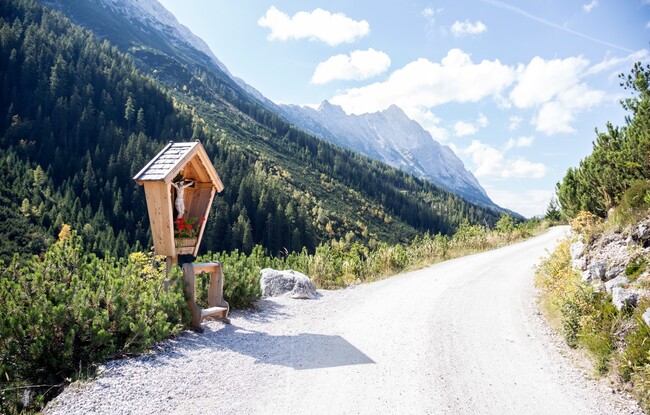 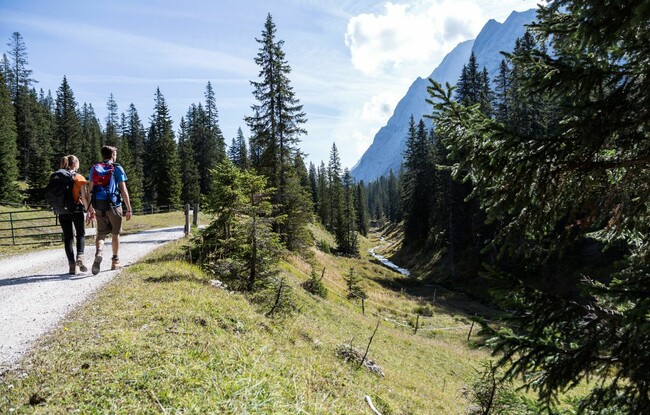 ​​trail description: Venture to where the deer and the mountain goats play—and to an area of awesome natural beauty. It’s a long journey at about 23 kilometres, but manageable. Walking along Leutascher Ache River and Gaistalbach Creek, take in old-growth forest and acres of amazing meadows and pastures en route. Follow Ganghoferweg Trail to Hämmermoosalm Alpine Pasture Hut and further into the valley to Gaistalalm and Tillfussalm Alpine Pasture Huts, where Ludwig Ganghofer’s Hunting Lodge is located. The route continues between Mieming Mountains and Wetterstein Mountain Range, with peaks that are becoming more and more striking as you hike on. A gentle climb takes to up to Igelsee Lake, where Leutascher Ache River has its headwaters. Amble down to Ehrwalder Alm and to the top of Ehrwalder Alm Gondola on a forest road. From there, a marvellous footpath winds down to the village of Ehrwald, towered by prominent Zugspitze Peak.

From there, continue westward on the broad valley path, running parallel to Leutascher Ache River and Gaistalbach Creek. At the fork, walk straight ahead following signage to “Ehrwalder Alm über Igelsee”. The route runs between Mieming Mountains on the left and Wetterstein Mountain Range on the right with peaks that are becoming more and more striking as you hike on. Altogether, the path gently ascends and leads to Igelsee Lake past a tiny knob. Behind the lake, bear right at the fork and follow the steep path up to an elevation of 1,600 metres (here, the path from Pest Chapel joins in). Follow the forest road down to Ehrwalder Alm Alpine Pasture Hut and to the top of Ehrwalder Alm Gondola.

Below Ehrwalder Alm Alpine Pasture Hut, the signed (“Wiesenweg nach Ehrwald”) meadow path to Ehrwald starts. First, it leads across the ski resort. At the fork, go straight ahead, then bear right and proceed on a steep portion through the forest. Thereafter, the footpath leads across marvellous mountain meadows and pastures over to the base of Ehrwalder Alm Gondola. From there, you get to Ehrwald on Altmühlensteig Trail, which starts a few metres southwest of the base on the left side of Gaisbach Creek downstream.